I remember 9/11. I remember where I was when I heard, how quiet it was a work that day while we all stayed glued to the radio, trying to figure out what the hell happened. It was a tragedy.

The response and immediate rise in airport security are understandable. The creation of the TSA seemed like a logical step in many ways. Sure, even at first the rules seemed a little over the top and the waste and abuse that has appeared in the agency since then seems to some to be worth it.

But one thing we learn from terrorists: they always have a new plan, a different method. There is no way we can make every aspect of our lives absolutely secure. We go to malls, movies, shopping, and travel on crowded roads at specific and predictable times. We go to crowded events in enclosed spaces, and trust that minimum wage security personnel and local police forces can prevent tragedy.

Given enough time, and with good planning, terrorists can strike anywhere, anytime. Even the ridiculous rules of the TSA are not enough. If anyone or especially a group wants to hurt people bad enough, they will.

So when a passenger refuses to leave a United Airlines flight and is dragged off forcibly, a few things have happened. It’s an indicator of bigger issues in our culture and our society. 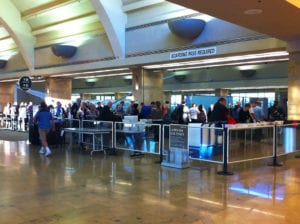 We all want to be safe. We want to take trips and have our husbands, wives, and children come home. From pilots to airport staff, we want everyone both to be and feel secure. The creation of the TSA was really a response to that. They may not have actually identified and stopped terror attacks, but they make us as citizens feel like something is being done.

Often, that is what we want. We want someone to do something, whether that is the right thing or not. Whether it is actually for our good or not. Whether or not it takes away a fundamental freedom from us or others around us.

Often, that is what we want. We want someone to do something, whether that is the right thing or not.

So we are willing to surrender at least some of our freedom for a feeling of security: we get to the airport an hour or more early, make our way through ridiculous security measures, taking off clothes and emptying our pockets, We endure pat downs of ourselves and our relatives, even the elderly and children.

In the interest of safety, we allow ourselves and others to be violated. Just in case.

Are we more vigilant? As a whole, no. We depend on the government to be vigilant for us, which creates an us and them mentality we seem perfectly okay with. They watch us, like giant adult babysitters to keep us safe, keep us from harming ourselves or others.

We depend on the government to be vigilant for us, which creates an us and them mentality we seem perfectly okay with.

We don’t take responsibility for ourselves or for being aware of our surroundings. We relax and relax too much because someone else is in control. We are encouraged to say something if we see something, but who do we say it to? Those who are watching us, caring for us. The same ones who restrict our movements and how much liquid we can carry onto an aircraft. Those who take our bags in accordance with Federal regulations should we leave them unattended for a moment, even if accidentally. The same watchers who tell us not to watch bags for someone else, or let them watch ours, something that would have been a common courtesy just a decade ago.

We are taught to be suspicious and untrusting of those around us, yet to trust in our overseers. “We’re the government. We’re here to help,” they say. My grandfather would puke.

However, insult is added to injury when they also say, “don’t trust that person next to you. You never know if they are a terrorist.” What brought down the plane in that field in Pennsylvania and averted another tragedy? A group of American heroes who trusted each other, had each other’s backs, and took out a clear threat.

The Threat Has Become Unclear

What is the real threat to our security? Is it ISIS or some outside force? Is it the domestic terrorists no one wants to talk about? Or is the threat, as many conspiracy theorists believe, the government itself? What part of the government?

With the rise of cybersecurity attacks and the fact that they can have a very real physical effect, terrorists don’t even need to be present to cause issues. With the leaks of Vault 7, the CIA’s own hacking code that we know is already in the hands of some of the world’s top hackers, it is clearer than ever that safe is a relative term, and whether the government we expect to “do something” and to “protect us” is hardly on our side.

“Sure,” we say. “Watch my neighbor. Watch those refugees and those people who do not share my religion or my beliefs. There is no reason not to watch people from certain countries. They pose a bigger risk than I do. But don’t watch me. Be selective.”

it is clearer than ever that safe is a relative term, and the government is hardly on our side.

It doesn’t work that way. If the government has the right — nay, the duty to watch some people, eventually it must watch all of the people. Because no one knows where the next threat will come from. It is all about being prepared, preventative.

Again, it creates the culture of us vs. them. We are all Americans, sure. But some of us are more Americans than others, especially those that work for the government. They are the most American of all, and must watch over, protect, and discipline the rest of us lesser citizens. And the non-citizens, those immigrants? Well, they are the least deserving of rights of all.

Everyone is a threat. Everyone must be evaluated by how much of a threat they are. The government is the one to do that. Trust them. Trust no one else.

The internet has created a feeling of anonymity and objectivity, one that is not real. Neither is this blanket application of security and surveillance. Everyone on a United Flight recorded the events with their cell phone cameras. Not one got up to help.

They didn’t want to get in trouble too, taken down with the guy in the aisle.

If everyone on the flight had stood with the man being dragged and beaten, stood up and said “No. This is not happening in front of us.” If they had done that, it might have stopped the events in their tracks.

The man on the floor was unfortunate. However, he was not treated as another person. If everyone on the flight, even the security personnel had harbored just one thought: what if that was your son? Your father or grandfather? Your husband? Would you stand by? Security personnel, would you be okay with someone doing this to one of your relatives?

And what of the Golden Rule, and treating others the way we want to be treated? Is this the way the man removed from the flight was handled? Would you be okay if someone did this to you if you refused to give up your seat? No? Then why is it okay for someone else to be treated that way?

Is that person somehow less human than we are? How have we come to regard humans as objects and groups rather than people like us? If you cut anyone of them, they bleed. Certainly, the passenger on the United flight did.

But what else was going on in his life? Where was he going? Who was waiting for him at the other end of the flight? Why was it so important to him that he stay on the flight? Did anyone else even ask?

And when he was being drug away, did even one person offer to give up their seat for him? Or was everyone so focused on their own wants and needs that they simply let him suffer? Why?

Freedom. It comes at a price. A risk of harm that we must take responsibility for mitigating. Security provided by someone else comes at the cost of at least some of that freedom. The more security, the greater the cost.

At the same time, we must find a way to treat each other as humans. Flawed indeed, but humans nonetheless. The punishment must fit the crime, and at all times we should strive to be fair. I don’t think United Airlines, the responding security, or even the other passengers on the flight did this.

No one is taking our rights or privacy at this point. We are surrendering them willingly in the name of feeling secure. Is the trade off worth it? The question is perhaps one only you can answer for you, but it is one we should be asking and answering together, before any decision that limits the freedoms of any American is made.