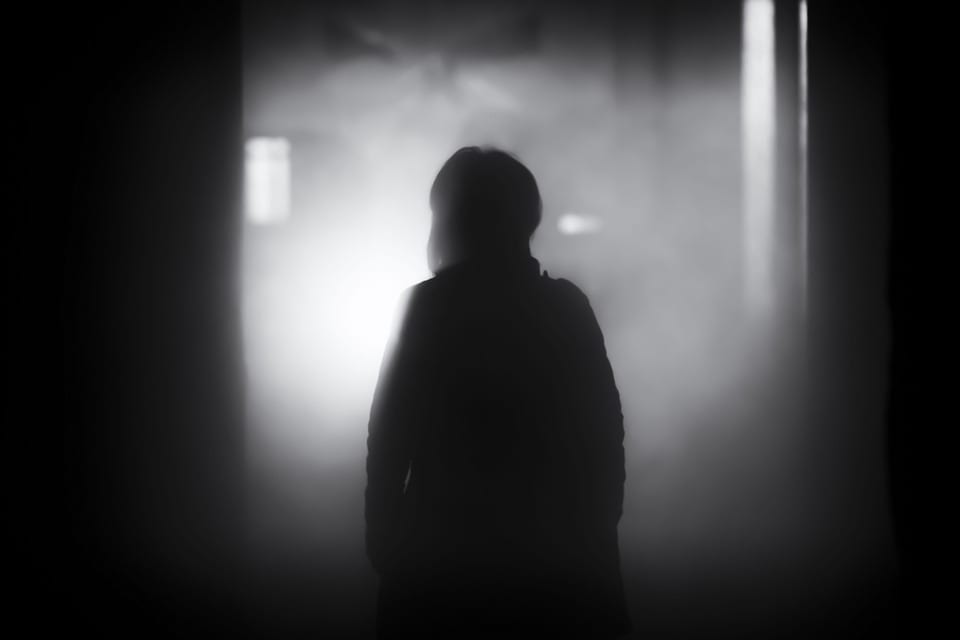 As a celebration of Halloween and my gift to you, here is a short story I wrote recently for you. I hope it gets you in the mood for the evening of frights ahead.

Shadow owes its birth to light.

“Does that line work for you often?” Rhonda was used to this. She ran her hand over the smooth wood of the bar and felt a sticky spot where a drink had sat sans coaster.

In fact, she did come her often, something she wouldn’t share with this stranger. Since she and her ex-husband had divorced, she was searching for something. Something different. Something not him.

“Almost never,” he said. The man was handsome, with a graying beard, the age her father would be if he hadn’t been dead for three years.

“I’m Rhonda,” she said. “And you are?” Music played in the background, pop crap that always played in these places unless they had a house band or worse, karaoke.

Rhonda took stock of her potential suitor. He was shabbily dressed, a threadbare polo worn over jeans that were flattering but not too tight. Wire rimmed glassed framed sky-blue eyes. His hair was gray peppered blond. The faint smell of cheap cologne mixed with equally common deodorant wafted off him.

“Hi, Solomon. What do you do for fun?” It was her standard question.

He gestured at the air. “This and that, you know. I work too much, try to get out on the weekends.”

It was then she noticed his hands. His left ring finger had a noticeable tan line, a place where a ring regularly rested.

“Well, it seems you struggle to live up to your name, Solomon the Wise,” she said. “What does your wife think of this particular hobby?”

Her second taker of the evening came over once the older gentleman had excused himself and quickly left the bar. He wore an expensive blazer with jeans and sharp leather shoes. He wore a smartwatch and a ring on his right hand, but nothing on his left.

Good opening. “Sure,” she said.

“A married guy. Looking for a good time.”

“You didn’t give him one.” It was a statement, and as he made it he laid his hand on her arm. It was warm and felt good.

“Nope. Not interested in the married type,” she said.

“Not sure yet,” she said. She set her drink down and put her other hand over his. “I’m Rhonda.” His skin was softer than she expected, his voice smooth and soothing.

The conversation went well from there. Alex was an accountant who hiked and camped in his spare time, even in the winter. He was a runner too.

So was Rhonda. A strong one. Some men told her that her legs were her best feature.

Her ex-husband had said so, before she found out he was cheating on her with his non-running, chubby ass secretary.

Alex leaned in to kiss her. She let him, and even kissed him back but not too intimately. His lips were soft, his breath fresh and tinted with whiskey. He smelled faintly of high-priced cologne, Obsession maybe.

“You too,” she said. She saw movement and glanced over his shoulder. Sitting in a booth against the wall was another man. The bar was nearly deserted and there was no light in that corner. He wore a fedora pulled down tight over his head, hiding his face.  To her, he was only a shadow.

The man made her uneasy. She could feel his eyes on her, like snakes. Crawling, exploring, touching, smelling.

“You want to get out of here?” Alex said. His hand was dangerously close to her right breast, and he kept looking down. She could feel the warmth from his skin but suddenly felt the urgent need to get home.

“You sure?” he said, moving in to kiss her again.

Rhonda pulled away. “Not tonight, Alex. You got a number?”

Alex looked at her chest again and then up into her eyes. “Yeah,” he said. “Yeah, I do. If I give it to you, will you call me?”

“Sure,” she said, unsure yet if she meant it.

He handed her a business card, and she pocketed it as she got up to leave.

“You too,” she replied, and leaned over and kissed his cheek. The tiny bit of stubble there tickled her lip. The bartender nodded to her. She glanced at the booth where the shadow had been sitting, but it was gone. Still, she felt like there were eyes on her, studying her.

As she stumbled out of the door, she realized she’d had a few too many drinks. The plum margaritas had been delicious and gone down much too easily. She turned and headed for her car.

The eyes made their way over her body again but from where? Across the street? No. Behind her. She turned.

A piece of shadow detached itself from the wall next to the bar. She turned and started walking rapidly away. The shadow followed.

Her footsteps seemed to echo, but the echo seemed delayed. She stopped, the echo stopped but a second too late. Someone was following her.

Her breath came in gasps. Maybe she should have had Alex walk her to her car. What would have been the harm? It was too late now. If she tried to go back to the bar, she might not make it. The only way was forward.

She walked faster, risking a glance behind her. A shadow with a hat ducked back against the wall. The strange man was following her, she was sure of it now. She nearly broke into a run. Her heels clicked on the concrete, and now she could hear them. Heavy footsteps that were not her own followed, getting closer, louder.

At that, Rhonda ran without looking back. The heels she wore slowed her down, but she didn’t dare slow to remove them. The footsteps sped up with her, and she imagined she could feel heavy breathing on the back of her neck, smell its sour odor. Surely, he must be close enough to grab her. Sprinting, she crossed the street. As she reached the curb on the other side, she tripped and fell, crying out and skinning both her knees.

One of her red heels had come off, and it stuck maliciously from a grate in the gutter. Without thinking, she kicked the other one off beside it. She looked behind her and at first saw no one. Then a piece of the shadows cast by the streetlamps moved.

In a second, she was on her feet and running, barefoot. The concrete shredded the soles of her feet, but she did not care.

She was about to die. She knew it. In a second, maybe less, she would be caught, beaten, killed, maybe worse.

Rhonda’s mind did not flash back to her failed relationships and failed marriage. There was no screen before her eyes displaying the good times or the bad. There was nothing.

She ran up the stairs as fast as she could. In one motion grabbed the car keys from her pocket and hit the button on the fob.

Nothing. The batteries were dead. Who needed them? It only took a few more seconds to manually unlock the door with the key. A few seconds she now did not have.

She fumbled with them. Dropped them to the ground with a clatter. Picked them up, panic taking over. Got the key into the door and popped the lock. Pulled on the handle, but her sweaty hand slipped off. Tried again, and the door swung violently open. She dropped into the seat, slamming the door behind her, expecting a hand to reach out and stop it, to grab her at any moment.

She was inside. Safe.

She hit the lock button and looked out the windshield. No one was there. There was no man with a fedora, not even a shadow. Her side windows were heavily tinted, but there were no shadows out either side either.

No one. Nothing. No footsteps, no foreign sounds. Just her breath rasping in and out of her lungs. Her keys sat in the net her skirt made of her lap. She slowed her breathing. It had been all in her mind. The garage was empty. Maybe there had never been anyone behind her in the first place.

Her arms still felt weak from all the exertion and her hands still shook. There were several small cuts on the palms, and she could feel skinned spots on her elbows. In the morning, there would probably be bruises from her fall. She considered going back for her shoes but decided to write them off as the cost for her foolishness.

As she tried to get the keys in the ignition, her hands betrayed her, and she dropped them. They bounced off her shin and slid under the seat.

As she bent over to retrieve them, she caught the scent of cheap cologne. Behind her, in the dark of the back seat, a man cleared his throat.