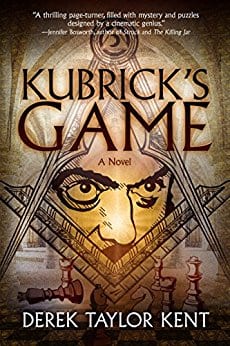 Antonio Mascaro, a professor at the UCLA School of Film and Television, receives a package that contains a reproduction of a famous Kubrick photo originally posted on the cover of Look magazine. On the back of the photo are the words, “Follow me to Q’s identity.” Mascaro calls on Shawn Hagan, an introverted, perhaps borderline autistic, student expert on film director Stanley Kubrick for help in deciphering the message. Shawn, in turn, enlists the aid of two of his friends at UCLA. Intrigued, Wilson Devereux, a former child movie star and Samira “Sami” Singh, a graduate film student, eagerly agree to help Shawn solve the puzzle. So begins a story and treasure hunt that will keep you guessing and turning the pages as fast as possible.

Despite differences in premise, characters, and writing style, a comparison of Kubrick’s Game

to the Robert Langdon series of puzzling suspense thrillers by Dan Brown are inevitable and appropriate. Still, I entered this book with some trepidation as I’ve little to no knowledge of Kubrick—neither his biography nor his films. Although I’ve seen several Kubrick directed and produced movies, I couldn’t give you any details about them other than title and premise. The good news is that my fears were unsubstantiated due to the author’s writing style. Taylor Kent writes with authority, great wordsmithing, and characterization. He is adept at showing the story so that even a reader with zero knowledge of Stanley Kubrick or his films can follow and enjoy the tale. Verisimilitude is a major piece of novel writing I appreciate above all else. To me, it is the most important facet in enabling readers to suspend disbelief. If realism, regardless of the story genre and content cannot be won… the entire story is lost. Every scene, every act, every character written in Kubrick’s Game is founded on a bedrock of verisimilitude and Derek Taylor Kent has joined the small number of authors I call favorites.