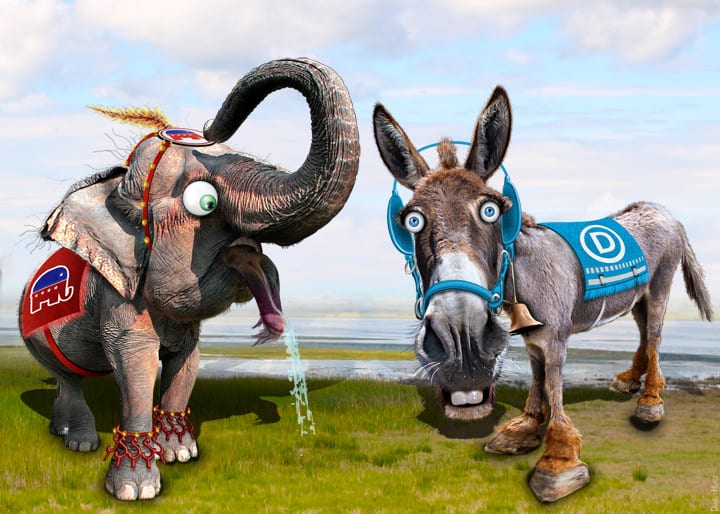 The day before the election, Democrats were polishing up their “call for unity” rhetoric. By all accounts, the victory should have been handed to Clinton on a silver platter. Yet, here we are with a Republican House, a Republican Senate, and Trump. The upset took the smirk right off your faces and the DNC made a full 360, looking for a scapegoat.

Historians will forever seek an explanation for the 2016 election results. How did such a thing happen? Many blame the rise of authoritarianism in the United States, including an editor at Vox who unknowingly predicted the election outcome months in advance. Despite the “When they go low, we go high” theme, the Democrats have been less than graceful losers. The finger has been pointed at Bernie Sanders, at F.B.I director James Comey, at Millennials, 3rd party voters, and nonvoters. Analysis of Big Data occasionally gets splashed on top of the frustration and angst of the drowning man that is our country.

Regardless of whatever reasoning you decide to go with, it’s time to move on from the results and have a solid look at what could be improved. Yes, Clinton did win the popular vote by a staggering amount, but house and senate fell to the wayside. If Democrats thought Trump was so dangerous, why wouldn’t they invest in keeping the house and senate out of the hands of Republicans? The last time the Republicans had full control of the government, we had a recession. The time before that? A recession.

The Democrats were incessant about what would happen, what was at stake, yet they did not consider what they would do if Clinton didn’t win? They did not consider the fact that if she did win, there would be another eight years of gridlock in the Senate just as there was with Obama? I question not only the DNC’s logic but also their motivations during this election. If you, the Democrat, can see no room for improvement, then why is the DNC incapable of winning at the most critical of times?

The DNC had the ball rolled to them, and yet they still lost a severely gerrymandered election to Trump. The man will be lucky if he is not impeached within the first year of his presidency. Come on guys, you can’t tell me mistakes were not made.

Democrats, blaming and shaming will also not get your party any votes.

Meanwhile, steadfast democrat voters insist that nothing needs to be changed. That Sander voters are not “true democrats” and that “their vote isn’t needed.” Guess what guys, you needed all the votes you can get. Alienating voters does not gain your candidate votes. Blaming and shaming will also not get your party any votes. Yes, Yes, we all know, Clinton won the popular vote by three million votes. But she still lost because her campaign strategy overlooked states that were decided unimportant or unreachable.

“Red States are a lost cause,” well no, they’re not. That dismissive attitude is what truly lost this election. Despite what MSNBC tells you, badgering people and calling them stupid won’t get your candidate elected. It’s time to stop attacking other progressives and prepare for the next election. Just because they don’t have the same MSNBC fueled ideas as you, does not mean they are not democratic or that their input is not valid.

Incorporate and adjust. If you don’t, you will have a mirror image of the Republicans and their Tea Party fiasco. The Republican majority ignored the Tea Party despite the wild popularity and are now held hostage by the movement. Is that how the Democrats want to deal with the “Bernie Bros”? That is what’s happening. Democrats, I imagine you could throw a goldfish into the next presidential election and get it elected, but what are you going to do about that House and Senate? What can you do to improve the lives of the American people, yes, all of them.

Work together with your more progressive counterparts or be prepared to shame and blame an even greater number than half the country.