Lighten Up: Getting Rid of Clutter 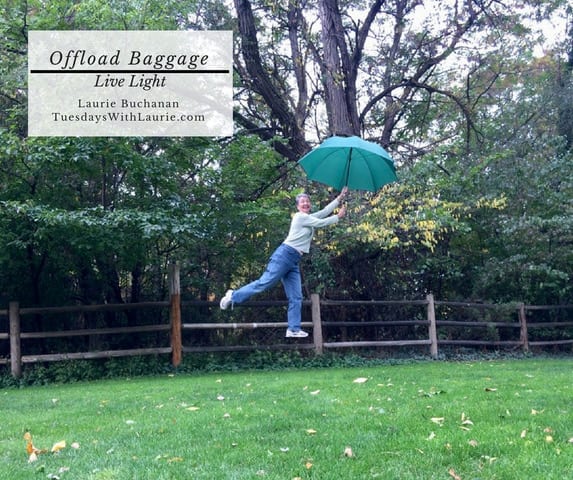 Dr. Wayne Dyer said, “Abundance is not something we acquire. It is something we tune into.” In other words, abundance is a state of being. All we need to do is learn how to connect with it, but it’s all too easy to let life’s clutter—internal and external—define our days, to become the critical factor in the choices we make.

My friend Jack shared, “Help! I’ve got too much stuff, and I’m running out of storage space. Not only is my garage packed to the rafters, but my bedroom closets are a disaster, and I’m also having problems in my kitchen pantry, linen closet, and laundry room. I’m drowning in clutterat my house.”

Emotional wellness means that we bring the unhealthy aspects of our feelings to light—take them out of our baggage—for examination so we can productively work through them, offloading baggage and increasing joy.

In taking an active role in our emotional wellness, we come to appreciate the value inherent in not taking things personally and in setting internal boundaries, and we begin to understand that when we clear internal clutter—emotional baggage—we create space for joy.

My friend Nancy said, “Clearing internal clutteris a journey not for the faint of heart but rather for a warrior—one who is willing to explore, to find the secret key, and to steadfastly turn it.”

When was the last time you cleared your material clutter? It’s easy! Focus on one closet or room at a time. You’ll need four boxes labeled as follows: garbage, donate, recycle, and sell.

Don’t keep things you don’t use. A good rule of thumb is that if you haven’t used something for eighteen months, you don’t need it. Donate clothes that no longer fit—they’re nothing more than closet eye candy. Don’t keep broken things because you might fix them “later.” Recycle old magazines, catalogs, and newspapers. Subtraction can be a bridge to gratitude.

My friend Monica shared, “Even though it’s simple, it’s not always easy.” Simple and easy aren’t the same. Simplicity is efficiency, a clearing of clutter, mental or otherwise, while easy is uncomplicated and trouble-free.

“It costs an average of $10/square foot to store items in your home. According to the National Soap and Detergent Association, getting rid of clutter eliminates 40 percent of housework in the average home. We wear 20 percent of our clothes, 80 percent of the time; the rest hangs there.” —SHERRY BORSHEIM, founder of Simply Productive

My friend Dorothy has been the primary live-in caregiver for her mother and stepfather of thirty years. When her stepfather became gravely ill, her stepbrothers and sisters, in an attempt to “guard their rice bowl,” forced Dorothy out of the home, fearing that “possession is nine-tenths of the law” and they might not end up with as much as they wanted.

Dorothy could have gone toe-to-toe with them in a legal battle, but she opted to view this as an opportunity, instead of a problem, and used it not only to clear material clutter from her life but to clear emotional and mental clutter as well.

She took a mindful inventory of the “stuff” in her parents’ house and opted to leave it behind. She said, “I’ve come to realize that less really is more. With fewer things to tie me down, I can do more living.” In offloading baggage, Dorothy increased her joy.

“Alchemy is the process of changing lead into gold. Inner alchemy (personal transformation) occurs when we clear our clutter—internal and external—and let go of things that no longer serve us well. This creates balance and space, a place that nurtures contentment, which I believe is true success.” —LAURIE BUCHANAN, holistic health practitioner, transformational life coach, and author

Lenore refers to herself in the third person when discussing something she doesn’t like, and in the first person otherwise. She shared, “I don’t know who I am, but I know who I’d like to be. The person who I am is in tremendous debt because she can’t stop using her charge card. I guess you could say she’s a ‘spendaholic.’ Her house is filled with boxes and bags of things that she can’t bring herself to part with. She’s gotten caught up in the world of having to have in order to be. She takes in every stray pet she finds because that’s her tangible source of love. It also contributes to the filth in her home that she doesn’t clean because she no longer cares. 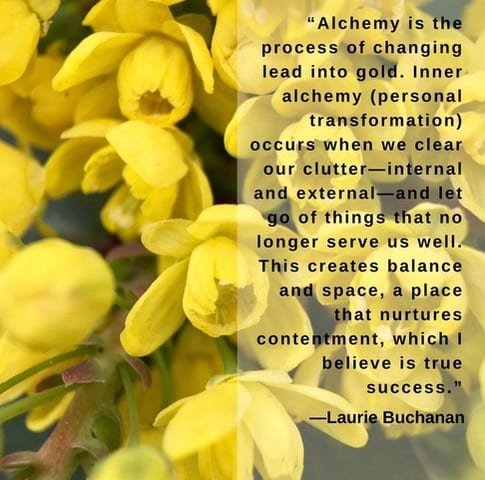 “The person I’d like to be is someone who’s responsible with her finances. I’d like to stop buying things I don’t want or need—my house looks like Stuff Mart. I want to be someone who cares about my personal appearance and does something about my weight. I want to come home to a clean house that I can invite people to without feeling embarrassed. I want to make friends—human friends—and find good homes for all but one of the animals I’ve rescued.”

Some of the “stuff” my husband and I have is for “special” occasions. I have a few pieces of my mom’s Depression glass, some green and some pink; they’re lovely. In the past, I used them only for special occasions, but when I realized that breathing—everyday living—is a special occasion, I started using them, along with everything else that I had set aside as “special,” on a regular basis.

What “special” things have you set aside that you can weave into your everyday living? Before making a purchase, I usually ask myself, “Am I going to have to dust or iron this?” If the answer’s yes, then I’m more likely to take a pass.

Is it a collection or clutter? Is it treasure or excessive acquisition? It seems the answer is in the mind of the beholder.

“The overwhelming desire to acquire, save, and compulsively collect—hoard—can be attributed to a ‘unique pattern of brain function abnormalities.’ Some women declare that men are the worst culprits, feeling that males suffer from ‘just in case’ syndrome—‘you never know when I might need this.’ Some men, on the other hand, say that women are the worst culprits, feeling that females suffer from ‘too much is never enough’ syndrome—‘I know I have three other pairs of black shoes, but this pair has just the right height heel for the outfit I’m going to wear.’ Research has shown the inability to discard doesn’t play favorites; it can equally affect both men and women.” —OBSESSIVE-COMPULSIVE DISORDERS PROGRAM, University of California, San Diego

Over time, I’ve come to learn that experiential purchases—like taking a friend out to dinner—provide far greater pleasure than material purchases. A side bonus is that the pleasant memories of the experience are long lasting and don’t take up any space.