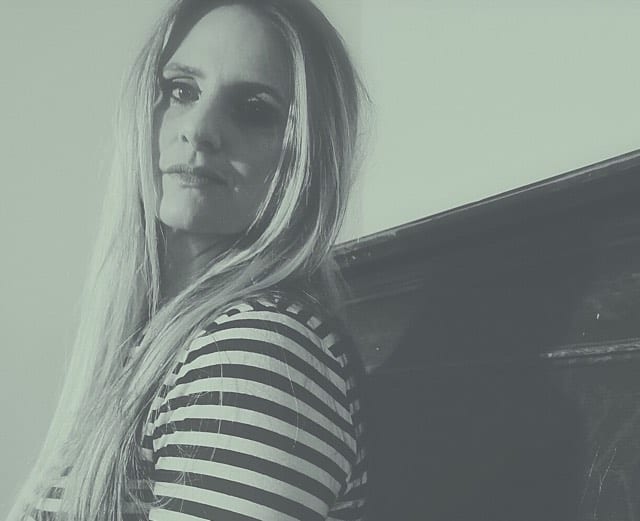 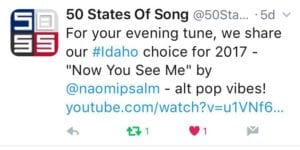 I saw a post on Twitter, and quickly recognized the artist, Naomi Psalm, a local Boise musician, and friend. So I decided to sit down with Naomi at The Local, a fantastic local lunch spot and a go-to for meetings, to talk about her music, career, and what might be next for her.

The things I found out were pretty amazing. Empathetic even as a child, Naomi started writing poetry when she was just eight years old. “It was some pretty deep stuff, even then,” she told me. She grew up in Florida and moved around a lot, even internationally before settling in Boise.

At 13, she picked up a guitar and began to play. “My parents were–well, still are–hippies, and we always had guests visiting. Lots of them were musicians, and would just sit and jam,” Naomi said. “I would watch their fingers making different cords, and imitate them.”

“I would watch their fingers making different cords, and imitate them.”

Naomi traveled a lot and was in Taiwan for six months at 14. She helped teach Taiwanese children English. At 19, as a part of YWAM (Youth with a Mission) she began working on a hospital ship, and for three years was the songwriter and bass player with the band on board.

A multi-instrumental artist, Naomi can play both acoustic and electric guitar, bass, and ukulele. She is also a beginner at the upright bass and would love to learn the banjo. Although she is a singer too, she didn’t always think her voice was her best asset. “My mom told me to sing a song, that people wanted to hear my voice. That surprised me,” she told me. “I always thought my voice wasn’t that great.”

Naomi has several singles available on ReverbNation, iTunes, Amazon, and you can also find her on Soundcloud. Besides playing solo gigs, she loves to collaborate with other musicians when she gets the chance. “I love to play with a full band,” she told me. “It is so fun to interact with the other musicians on the stage.” When the opportunity comes up, she has several band members she plays with, pulling together whoever is available at the time.

Genre? Please. Psalm’s soulful voice lends itself to many. From her own folk rock to a blues type collaboration with Ryan Bayne, her voice seems to adapt to a number of styles. However, she doesn’t limit herself to just those styles.

Recently, Naomi collaborated with hip-hop artist eLAyCee~SSF on their album Visions. She sang on several tracks, including “War”, “Until the End”, and the title track “Visions”.

She has also written songs as a part of movie projects. Her single “Now you See Me” was written for Ghostumentary

, a ghost hunting documentary filmed in Idaho, Seattle, and San Francisco She also sang backup vocals on another soundtrack, this one for the film Bloodsworth – An Innocent Man

“I’d like to do more collaborations like this, more commercial stuff,” she told me. “I don’t think you make it big by playing gigs in coffee shops and bars, waiting to be discovered. I think it is about more than that.”

This is one of the many reasons you won’t find Naomi Psalm playing as the house band for a bar every weekend. “It really taxes your voice,” she said. “And if someone can see you in a bar for a $5 cover every Friday, why are they going to pay to see you in concert at a bigger venue?”

Like many musicians, Naomi has a day job. More than one, actually. But she is working to change that through getting her real estate license. “Hopefully, it will make my schedule more flexible and make it so I can work fewer hours, and concentrate more on music.”

Also like many other artists, Naomi has dealt with depression. For her, music is cathartic and provides an outlet to deal with it. Her single “Shelf Life” talks a little more directly about the ups and downs that come with depression, something many of us can relate to.

This empathetic tone, the same one that inspired her poetry as a child, runs throughout her original songs and is a hallmark of her musical style. Not that her music is depressing: far from it. There is an amazing depth in her songwriting that resonates with the soul.

As to what’s next, Naomi has several singles ready to record. More music will be coming soon. She will also be performing with a full band at the Boise Music Festival June 24th at 7:30. “I’d like to do more TV and film,” she told me. “More collaboration. Variety is what I strive for. I wouldn’ want to be stuck in just one avenue of musical expression.”

Finding a musician of this caliber with this kind of experience is amazing, especially when you sit down and talk with her, you’d never guess it. Naomi Psalm is kind, quiet but not too quiet, and a person who is easy to talk to and get to know.

If you’ve discovered Naomi Psalm, you know that her songs are much richer than her demeanor would portray, and the powerful vocals that pour out when she starts to sing are almost unexpected after you’ve met her in another setting, away from the stage and the lights.

Check out Naomi online on Facebook and Twitter, watch her on YouTube, listen on Soundcloud and ReverbNation, and buy her tracks on iTunes and Amazon. Catch her at Boise Music Festival, and support your local indie artists and musicians.

Are you a local artist who would like to be featured on Unbound Northwest, or do you know one? Contact us here.