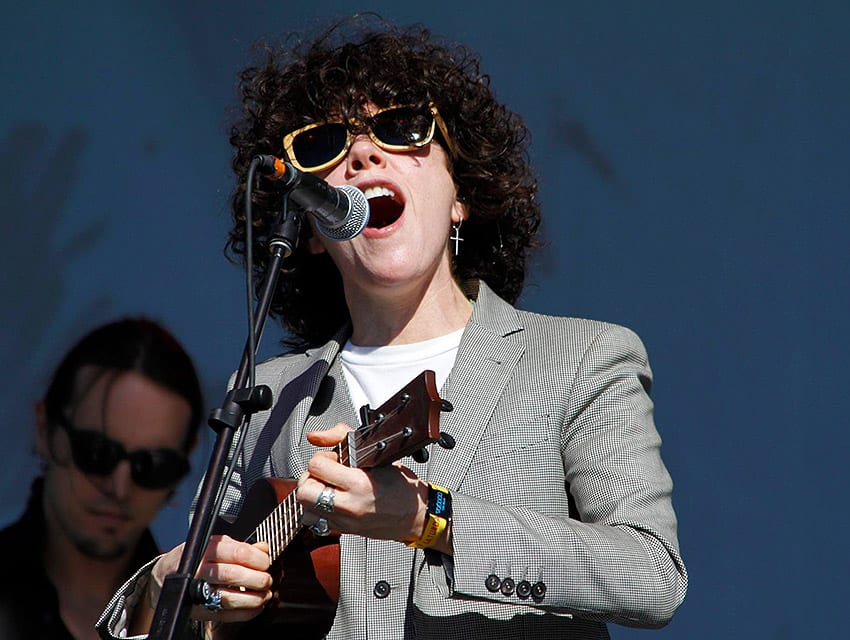 If you watch Orange is the New Black, you may recognize her song “Muddy Waters”.

LP’s Tavern Room venue in Seattle was sold out. As was the Star Theater in Portland. If it wasn’t for some awesome friends who bought additional tickets to the Portland show, I wouldn’t have been able to see this amazing concert. It seems most of LP’s shows are sold out. 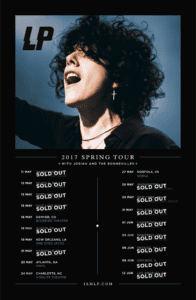 Despite being Seattle-based, I was more than willing to make the three-hour drive to Portland. Turns out I wasn’t alone. It seemed like everyone attending the concert were from Washington. Most got hotel rooms, but we opted to drive home.

The doors were supposed to open at 8, and they ran late. It seemed that everything ran late. Perhaps it’s because I’m old and cranky, but we waited for an hour until the opening act Josiah got on stage. LP didn’t get on stage until closer to 10. By then, I was missing my bed. I think it would have been better if they shifted the times down an hour, but performers have little say in concert times.

The venue was small but beautiful. It had several bars. A bar upstairs in a cozy loft area. A bar downstairs at the front of the venue. A small food vendor with yet another bar in a mostly covered outdoor section. The outdoor area lots of seating, heating lamps, and a gas firepit. All the creature comforts drunk people require to enjoy their evening in the Northwest.

Josiah, the opening act was entertaining. He was young and funny, but with the soulful heartbroken twang, all Nashville musicians should have. He had no band. It was him singing, playing guitar, and a Harmonica. Josiah would occasionally stomp around to create a beat for his songs, and it sounded magical on the old wooden stage. He sang songs about high school sweethearts and his initial failure as a signed musician. Everyone enjoyed his song about the six-dollar-check he got from Warner Bros. LP’s drummer and guitar player hung out next to us watching Josiah’s performance.

After about a half hour, LP finally got on stage. She’s a petite woman with wild curly hair and she was dressed in a suit that Prince would have approved of. The Prince comparisons didn’t end at her costume. She has a similar movement and stage presence like the late and great songwriter. Unlike Prince, LP is much more accessible as a human being. She was engaged to her audience in a way I don’t often see. Smaller venues are fantastic for intimacy with a performer. But even at small venues, it’s easy to build a wall between the stage and the audience.

LP was having none of that. On top of her incredible vocal abilities, she talked to a few people in the crowd that she recognized. Shook people’s hands and wasn’t afraid to interact with her audience. Even when someone started throwing things on stage, her bass player picked up the item and realized it was a snap-on bracelet. He then donned the snap on bracelets.

This tour is focused on LP’s most recent album Lost on you. The album describes a brutal and painful break-up. Most strongly noted in the song “Lost on you”. There are several upbeat sexy rock songs as well, “Up Against Me” and “No witness” are fun. The entire album is solid from beginning to end.

LP also played a new song that I enjoyed. It felt like it was from the same breadth of “Lost on You.” She finished with “Into the Wild”.

By that point, I was hanging out outside noticing just how many drunk people were around. Several girls were kicked out a few times during the performance for being too drunk. A woman passed out and had to have an ambulance called. A few feet from me, a triplet of ladies were having difficulties remaining vertical. The bar assured me that all the drunk girls had hotels within walking distance and they assisted a few of them home. I loved how attentive the staff was at The Star Theater.

If you can somehow manage to get tickets to see LP, go see her.

You can check out more information about LP on her Facebook.