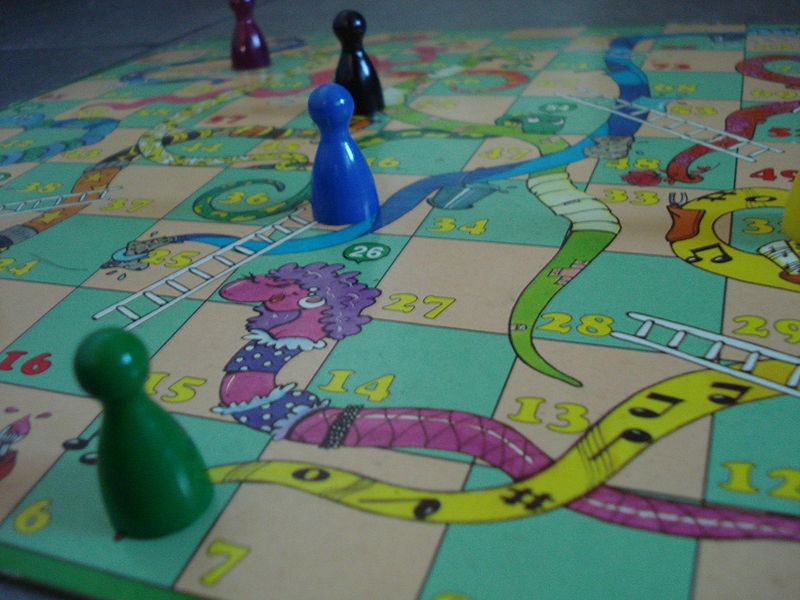 The author and podcaster extraordinaire, Joshua Pantalleresco joins us with a new twist on an old game. His podcast, Just Joshing is available everywhere, and he can also be found at his website, here.

Most people know the game snakes and ladders. You probably don’t know the origin of the game.

The Milton Bradley game I loved as a kid was originally a Hindu game called Mokshapth. Mokshapath is the snakes and ladders game taught in India. It teaches the virtues of karma and reincarnation and illustrates that if you do good deeds, you shoot up to the path of heaven. If you do bad deeds, you slide down the snake and into the pits of hell. It’s an interesting game for children, but it’s an ingenious way to teach lessons. Give someone the ability to have fun, and they become much more open to learning something. In my own advertising pitches, I always try to incorporate a little bit of play in the game. Convince people that they will have fun, and they will. And in that fun you can learn something or encourage behaviors.

For reasons I couldn’t fully understand I always associated this game with Alice in Wonderland for some reason. Alice following the rabbit into the rabbit hole always seemed like she was sliding into a forbidden realm as a result of her curiosity. When I look deeper into the archetype, this disobedience is one of the cardinal sins women do in literature going all the way back to Eve. So let’s explore this.

God told Adam and Eve not to eat from the forbidden fruit. A serpent was able to convince Eve to try it anyway. And Eve once she had some, gave it to Adam. Eve, Alice, and Pandora (my third example) possessed an innocence to the situation. It’s not that different than Percival’s innocence when he goes on the quest for the holy grail.

Eden itself is a holy place, and the tree is a holy object. Adam and Eve both were innocent. They were unaware and not ashamed of their nakedness. Upon eating the fruit from that tree, the perception was changed forever. That disobedience, that wanting to know what it was, cast man from the garden. No longer innocent, Adam and Eve came to this world and rebuilt their lives from scratch.

Disobedience is the sin here. It’s a big one in Mokshapath, and you definitely take a big fall. Eve got mankind kicked out of the garden. Such a simple thing led to a terrible disaster. That theme of disobedience echoes over and over in our stories. One of the lessons of the game is that one wrong sin can set you back a long ways in life and force a lesser reincarnation.

It’s interesting in our stories the link between curiosity and that disobedience. Pandora was made to drive men mad. The box, which was a thing never to be opened created questions in Pandora’s mind. What was in the box? And what would happen if I opened it? That curiosity of wanting to know more is a driving force in mankind. It’s what led us to the discoveries we have had. That need, that drive to explore what’s out there is what makes us who we are.

Yet those very curiosities which had originally tempted Eve, and now, Pandora.  Not obeying the law, and not appreciating the innocence we have makes us fall from the magical points in the world, and we lose that innocence forever.

Yet the game is more forgiving here. Pandora still had one last thing in the box, and that thing made the calamity bearable. Hope. Pandora unlike Eve has a kernel of hope in the redemption. For the last thing to leave Pandora’s box was hope. Hope is what lets us wish and dream of a better tomorrow. Where that one day all this suffering and sadness can disappear forever.

One could argue that Percival is part of the story. Percival is a knight of the round that possesses a purity of heart, not unlike Eve or Pandora. His crime is very similar. Percival’s purity of heart let him see the grail. After he possessed it, he did great harm to his family unwittingly. He spends the rest of his life trying to make amends for that moment and tries to find the grail again.

Percival, unlike Eve or Pandora, didn’t cause harm from maliciousness or giving into temptation. Rather, he just saw something and had it, not knowing what it was. His innocence was ignorance. So maybe at this point the game said to itself, that accidents happen. Percival lived a life he was proud of.

Alice however, has hope. She falls into the game right away. You could make the argument that the journey in wonderland is not that different from the Mokshapath board. Alice eats and drinks and confronts the wonders and mysteries of Wonderland. In one sense, Alice had an inverse reaction to all the others listed here. Where they doomed themselves to a cruel fate by being cast out of a magical place, Alice found herself in one. Her disobedience punished her with a mad world, unlike anything she ever encountered.  Going back to her normal world is the goal.

Alice chutes up and snakes down depending upon the journey she takes. She eats and drinks and follows the White Rabbit wherever he goes. She dodges a Queen and has tea with a Mad Hatter and goes through an incredible ride until the end.  The other major difference between Alice and everyone else is that unlike them, Alice only has to face her own consequences. Trouble finds her, but only her. It’s not the doom of the world, but rather the fate of those who stumble into things having to fight their way out.

There is nothing like Wonderland. There are Cheshire cats and caterpillars and playing cards and foods that shrink you and grow you according to what you do. It’s a maddening wild trip into the subconscious of literature and games. For Wonderland is a game that Alice has to traverse in order to find the way home. There no apparent rules and the world itself works to its own devices. It’s a mad world.  Unlike Pandora who made men mad, Alice perhaps was a little mad herself.

If you manage to get to the top of the board, you win. Some just fall for good. Eve disobeyed and Adam with her and the serpent sent them from their holy place of Eden down to Earth. Percival never found the holy grail, though he spent his life trying. He played the game but didn’t quite win.  Pandora opened the box and yet in spite of the madness that followed carried hope with her. Even if she didn’t make it to end, there’s a sense that Pandora never gives up.

For Alice, the ladders lead not to Heaven but to home. She ultimately wins the game, shooting up to the place she truly belongs. And maybe, that’s the game in of itself. Different characters, different lives each trying to get to the end goal. Each trying to reclaim what was lost. Maybe they fell and rose according to the complexities of the chutes and ladders. Perhaps our storytelling is the game simply playing itself out.

Or maybe the game is still being played. Maybe Alice will give way to another character, very innocent, a little curious, a little foolish, and perhaps just a little mad. But maybe, just maybe, That character will make it home without looking glasses.

And maybe, that’s the connection I see.

Joshua Pantalleresco is a writer, podcaster and freelancer. His podcast, Just Joshing has, 382 episodes released so far, primarily featuring authors as guest, but he’s interviewed journalists, musicians, illustrators, voice over actors, actors and actresses, narrators, politicians, comedians and pro wrestlers. Occasionally he does audio readings of his novel the Cloud Diver.

The podcast is available on all platforms and is a 3 time Aurora Finalist with listeners in Canada, The Us, and across the world.

Contact him at [email protected] if you want him to promote your product, write something for you or host your show.