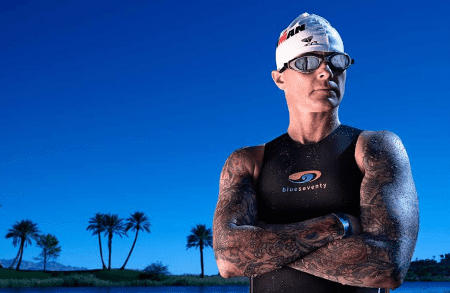 This post was originally written by Jerry Mooney and appeared on Zenruption.com.

Todd Crandell is changing the game for addicts. Instead of illuminating an easy path to achieve sobriety, Todd has become the example for replacing the difficult path of recovery with the ardor of extreme endurance sports. His story and his path are as unconventional as they are inspirational, changing the lives of addicts, dependents and mere observers.

Addiction is a brutal path to navigate. It burdens addicts as well as those who love them. For those affected, everything has an elevated level of difficulty. Normal situations like holding down a job or sustaining a relationship become Olympic level hurdles. A multitude of issues emerge that must be dealt with. But quitting is easier said than done and as addicts careen through their lives, often creating substantial collateral damage to those who surround them.

Because addiction is devastating and recovery is so often met with failure, success is usually measured simply by sobriety. Often, days are counted to memorialize the path of those in recovery. Todd Crandell has taken the inspiration that recovery offers to a new level. Not satisfied with simply counting the days without using, Todd chose, instead, to pile challenges onto his path. 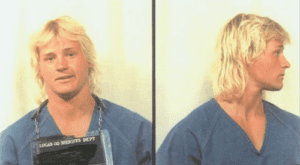 Crandell firmly believes that his method increases the chances of success and broadens the definition of what successful recovery means. His story began as a three-year-old boy who lost his mother to a drug and alcohol-related suicide. He says that losing her created a painful hole inside him that he struggled to fill. Once he came across cocaine, he discovered some relief and the drug became his new method of coping. This lead to a journey where he pinballed from one drug-induced disaster to another. His promising dream of becoming a professional hockey player succumbed to the need to feed his habit. Eventually, he was kicked off his high school hockey team for using cocaine on a bus ride to a game. This dramatic event still didn’t alter his commitment to getting high. 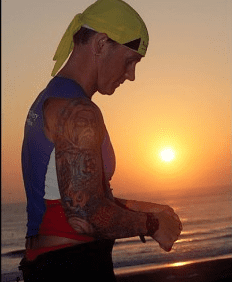 Todd continued down a reckless path of self-destruction, all too familiar to those who have experienced the devastation of drug abuse. He strained his relationship with his father. He was arrested multiple times. Friends and family felt helpless in the wake of his self-abuse. These stories are common among addicts, yet those in the storm still find themselves alone. Pain, addiction, and disaster leave families in ruin. But recovery does exist. Although the odds paint a gloomy picture, Todd Crandell firmly believes he has developed a method that works and fills an important need for those who have struggled with conventional recovery methods.

When Todd Crandell decided to get sober he didn’t have a clear plan. He simply knew it was time. He had exhausted the path of destruction and needed to change. Exploiting his talents as an athlete, Todd began to substitute extreme athletic training for his extreme substance abuse. And extreme is not an exaggeration in either case. Todd began training for one of, if not the most demanding sports known to humans: the Ironman triathlon. Ironman triathlons are a combination of three endurance races, each leg of which would be considered a major feat by most. But a triathlete must complete all three in a single day. 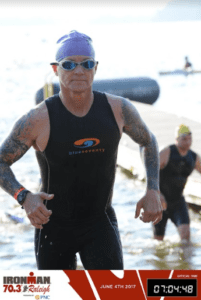 The triathlon begins with a swim. Not just a game of Marco Polo in your backyard pool, but a grueling 2.4 miles. That may not sound as amazing as it truly is because we have all walked that distance. But swimming that far by an elite trained competitor takes around an hour. Can you imagine swimming for an hour straight? This means never letting your feet touch the ground or taking a quick break at the side of the pool? It is a race and the athletes race through the water for the first leg of the journey.

After swimming this heroic distance, competitors must then transition quickly from their swim gear to biking attire. Keep in mind that they just swam non-stop for an hour. Then they embark on an 112-mile bike ride to complete the second leg of the race. Most people fret driving 112 miles let alone riding the distance on a bicycle. And this, again, is a race, so it isn’t a casual ride, with stops to enjoy the scenery. It takes several hours (usually more than 6) for the competitors who are at the top of their games.

At the end of the grueling bike ride, these athletes change into running shoes and take off for a complete marathon, 26.2 miles. Running a marathon is many people’s major goal in life. Just to complete that part of the race would be worthy of stories and adulation for most of us. But for triathletes, the marathon is run after an arduous swim and a heroic bike ride. Nonetheless, these competitors take off running, legs still jelly from peddling. At this point of exhaustion, they take on 26.2 miles of distance running. All totaled, these athletes swim, ride and run for over 13 hours. 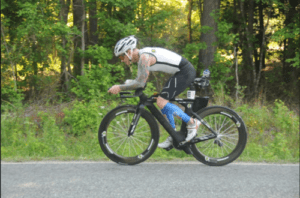 Crandell received positive press due to his recovery and inspirational story after upon completing an Ironman triathlon in New Zealand nearly seventeen years ago. This inspired him to dedicate his path to help others in need. Through his organization, Racing for Recovery, Todd does more than just provide an inspirational example for others seeking sobriety. He has become a Licensed Professional Clinical Counselor (LPCC) as well as a Licensed Independent Chemical Dependency Counselor (LICDC) and uses his platform to help others who struggle. He also believes his new commitment to a vegan diet and holistic living aids his battle against substances as well. Eating has been widely associated with triggers to substances that often lead to relapse. Veganism improves Todd’s ability to disassociate from his former ways.

He has been featured on Sportscenter, The Drs, NBC Spotlight and more. Todd leverages his story of severe addiction and recovery to broaden his impact on others. But his impact isn’t only an inspirational story, Todd puts in the work. He meets with addicts and counsels them. He also takes on those who are interested in mirroring his path as an extreme endurance athlete as a coach and mentor. He has completed his twenty-eighth Ironman triathlon along with forty-two half Ironman triathlons. He maintains his commitments to training, racing and sobriety. He is now addicted to giving back and has dedicated his life to helping others. Even though Todd’s life got off to a rough start, he is now winning the race for recovery.