Everyday Heroes: Who Looks Up to You?

My heroes include people from all walks of life who exude hope—a belief in a positive outcome. Their lives reflect their heart’s desire, combined with active expectation.

My mother, Delle Hunter, was a physically small woman, yet she was the biggest person I’ve ever known. She had total focus, an attribute that deeply impressed me. She taught me by example that how we live impacts how we die. She lived a life of courage, beauty, and integrity; she died in the same manner.

When my mom was seven years old, she contracted polio. As a result, one of her legs was shorter than the other one. She never let it hold her back. When I was in grade school, she had an operation to lengthen her heel cord. It worked, to a degree. She never voiced any disappointment. My mother’s cup was half-full, never half-empty. She was all about joy and love and passing it along.

Diagnosed with breast cancer at the age of forty-one, my mom had a mastectomy, followed by chemotherapy and radiation treatment. She never complained—even when I had to shave her head because huge chunks of hair had fallen out. She faced her challenges head-on and did what she had to do. Other than the fact that she’d lost her hair, you never would have known the agony of what she was going through. Life burned inside my mother; she glowed. Which of your family members come to mind when you think of heroes?

My other heroes include Mother Teresa, Jane Goodall, and Anne Frank. Mother Teresa left an exemplary, indelible fingerprint of compassion on the globe. She became a nun at age eighteen and devoted her life to working among the poorest of the poor in the slums of Calcutta, India. In 1950, she started the Missionaries of Charity, whose primary task is to love and provide practical help to people nobody’s prepared to look after. On a religious or spiritual front, who is your hero?

In her individual efforts, Jane Goodall has helped to make our planet a better place for people, animals, and the environment. Her book Harvest for Hope: A Guide to Mindful Eating is among my favorites. Who’s your hero when you think in terms of environmental stewardship?

Optimistic, patient, selfless, and strong, Anne Frank has been called the “Human face of the Holocaust.” The diary she kept when she was in hiding from the Nazis is a life-affirming record of her spirit and hope in the face of cruelty and danger. When it comes to overcoming daunting obstacles, who is your hero?

I have tremendous regard for Amelia Earhart, Barbara Walters, and Rosa Parks. American aviation pioneer and author Amelia Earhart was the first woman to receive the Distinguished Flying Cross award for becoming the first female pilot to fly solo across the Atlantic Ocean.

American broadcast journalist and author Barbara Walters began her career as a receptionist in an ad agency and then worked—hard—and eventually took the news world by storm in 1976, when she became the first female co-anchor alongside Harry Reasoner on ABC Evening News.

Remembered as the black woman who refused to give up her seat on a bus to a white man, Rosa Parks stood up for her rights. She was arrested for believing she had the same rights as white people. She’s remembered as saying, “The only tired I was, was tired of giving up.” When you think of people whose experience created opportunities for others, who’s your hero?

When Susan Boyle appeared on the television show Britain’s Got Talent, she didn’t have any glitz and glamour. There wasn’t anything astounding about her physical appearance. In fact, she appeared “ordinary.” When she walked on stage, the audience began to snicker.

“To free us from the expectations of others, to give us back to ourselves—there lies the great, singular power of self-respect.” —JOAN DIDION, award-winning writer, playwright, screenwriter, essayist, novelist, and journalist 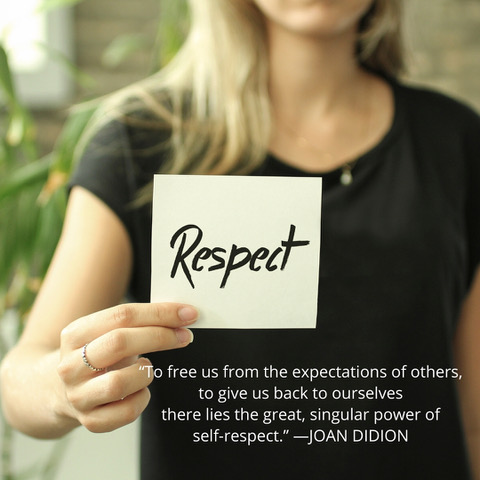 In his famously condescending style, the show’s host asked the usual pre-performance questions. To the audience’s delight, she answered nervously. It was evident that everyone was looking forward to watching her fail. And then she sang, “I Dreamed a Dream.”

As CNN reported later, “She wasn’t painfully ordinary; she was amazingly extraordinary.” The audience immediately jumped to a standing ovation and stayed there until the end of the song. CNN went on to say, “Susan Boyle is a phenomenal role model for all of us, not just because of her talent or her courage or her perseverance or her supportive friends. She is a phenomenal role model for us because she is us, in all our awkward ordinariness and amazing extraordinariness.” When it comes to authenticity—living transparently—who is your hero?

Each of my heroes overcame challenges in the face of discouraging obstacles. They persevered even when the task seemed daunting—sometimes dangerous or even life-threatening. Each of my heroes handed me a key to unleashed, unlimited potential, and possibility.

To whom are you a hero?

Never underestimate the influence you have on others. Each of us has a sphere of influence. Whether we’re a global citizen, like Mother Teresa, or a local citizen, what we think, say, and do has far-reaching and lasting ramifications. 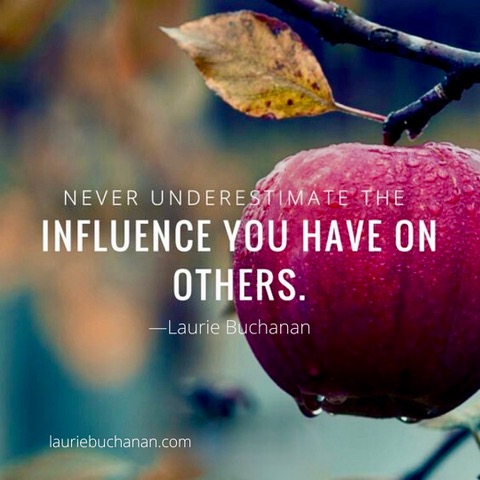 My fifth-grade teacher, Mrs. Kline, gifted me with the book The Swiss Family Robinson, and with her determined but gentle understanding, she changed the trajectory of my life.

Sometimes we have no idea how one simple act can result in reverberating changes that undulate outward—and sometimes inward, too.

It’s my perspective that each of us has an undeniable responsibility to ourselves and the rest of the world to be our personal best on any given day. Similar to putting a hand in wet cement, we leave an impression long after we’ve left the scene. We exercise wisdom when we’re mindful of our influence on others.

Who is looking up to you?