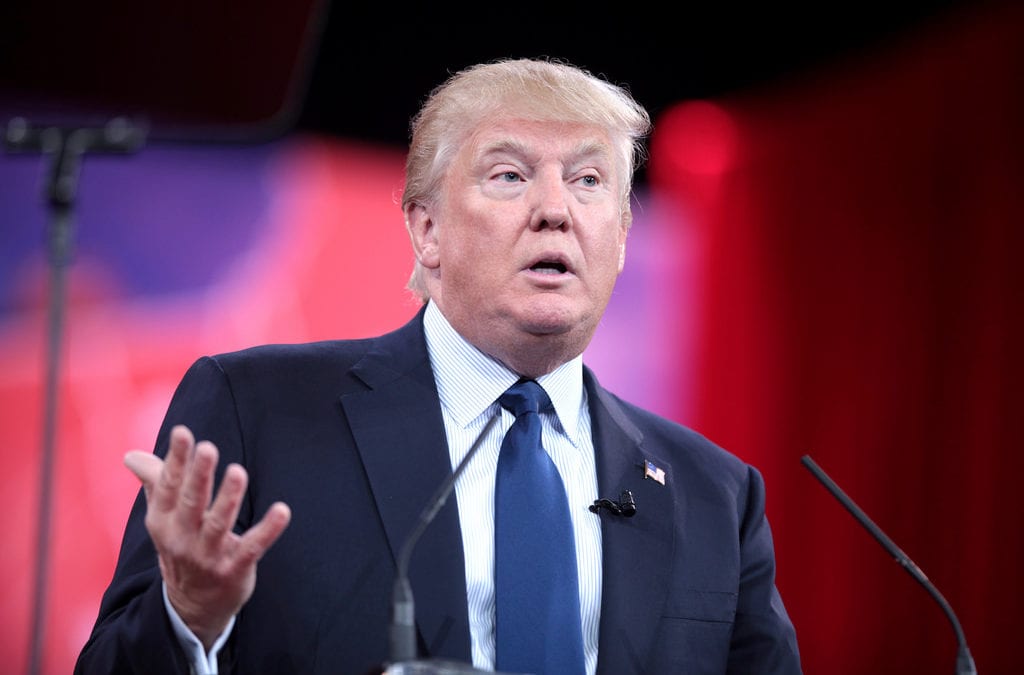 There have been dozens of studies about the 2016 election upset. Researchers, journalists, historians, and most Democrats will spend excessive amounts of time attempting to discover just what caused Trump to become president.

The comparisons to the film Idiocracy are many. The rest of the world mocks America. The GOP is doing everything they can to take advantage of the free reign they have in our country. So why are there still Trump supporters?

Many who consider themselves intellectuals have written articles about why people voted for Trump. Democrats insist that racism and sexism are the key factors. Others suggest Big Data, hatred of Clintons, Gerrymandering, and of course Bernie Sanders opposition to Clinton is also to blame. Lot’s of blame to go around! Don’t forget those third party voters.

Seriously, it’s a little bit of all those things, but none fully add up to what made people vote for Trump.

Because they hate Democrats.

I’m not kidding. Stay with me.

Think back to high school. Think of that person that made you feel inferior. They weren’t necessarily better than you. Their grades were not all that much better. They didn’t do a whole lot better on the track field. They were not all that attractive. Yet they walked and talked as if their poop didn’t stink. Truly, this person was probably just as insecure and terrified as you were, but they never let on.

If you had a chance to flip that person the bird, even as an adult, you probably still would. Chances are, that person hasn’t changed their attitude much. They are just waiting for your High School Reunion just to remind you that they are better than you.

I’m not the first to notice the splint of anti-intellectualism wedging its way into America. I find myself debating right wing voters armed with facts and empirical data that they instantly dismiss because it comes from Harvard. They don’t want facts, they want Democrats to be miserable. I’m seeing more and more comments where Trump voters are admitting it. They voted to spite you.

Now you may argue, “That’s crazy! Who would vote against their own self-interests?”

That indeed is a solid argument. Why would all the red states and swing states vote for a man who wants to repeal the services they rely on the most?

That’s how much they hate you. They will throw their grandmothers and cancer-riddled children into the streets if that’s what it takes to make Democrats cry. 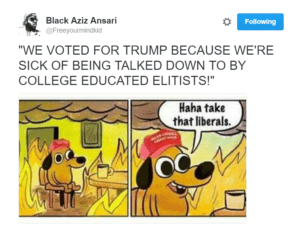 You called conservatives ignorant, racist, sexist, and anything else in attempts to wake them up and see your point of view, Democrats. They would rather be the self-fulfilling prophecy you painted them as rather than let you beat them down.

I came to this conclusion when I thanked a Twitter account for posting an article about how the far left are sacrificing the most by trying to maintain the ACA. The GOP has made several attempts to repeal the ACA (Obamacare), and instead of pushing harder for Single-Payer, many far left are just fighting to keep the status quo. I thanked the writer and the Democrat who posted it when I was instantly attacked by other Democrats. They were angry because I called myself progressive. In their minds, I was not “one of them” because I did not blindly follow Clinton.

In social media, this is a common occurrence. Almost daily, I receive beratement from Democrats who are angry that they lost. They blame me, they blame Gary Johnson, the people who didn’t vote. If I didn’t know any better, I would think that I wasn’t registered as a Democrat who voted for Clinton. I’ve had numerous conversations with Clinton-supporting Democrats where they refuse to acknowledge any wrong doing what so ever.

How can one call themselves progressive without looking at how to make things better?

That in itself is what being progressive is about. You find things that work, and if they don’t work, you try something new. No matter what you attribute Clinton’s loss to, the fact remains that it was a loss.

I find it hard to believe that Democrats lost the presidency, the House, and the Senate by doing everything they possibly could.

Instead, the Democrats would rather shamble around stupefied by the loss to a man who blatantly lies to his own voters.

There are Trump supporters regret voting for him. There are Twitter accounts dedicated to the jilted voters. But most have their feet firmly planted by their president. Some have developed thickly insulated walls to protect their ideas of the man. Others readily admit that they couldn’t stand the smug faces of their perceived rivals faces and would vote against someone instead of for someone.

This is not a call to action editorial. I don’t have any solutions and there is nothing I would take back. I expect many people are rooted in the same stance as they were pre-election. Perhaps because I was removed from my own party, I don’t have that sense of tribalism that Democrats, Libertarians, and Republicans experience. But I have lost the will to try and convince Republicans that I care about them. They don’t care.

One major conservative value is discipline. Spare the rod and spoil the child is their motto (inaccurately interpreted motto) and Republicans see Trump’s win as a punishment for voting for Obama. As children, they probably heard, “this hurts me more than it hurts you,” before being spanked. Most people who spank deny the existence of oppositional defiance. This election was a case in point for oppositional defiance. Conservatives know Trump is awful, they’re not as stupid as you insist they are. They literally voted for Trump because it was defying you, the elitist Democrat. You who insist you know what is best for them. You who constantly throw facts at them as if they didn’t already know.

One way or the other, Democrats need to own up to the fact that they are the reason Trump is in office.